Everyone agrees that saving electricity is good. But towns and the utilities that serve them may not see eye-to-eye when it comes to upgrading the street lighting.

LEDs offer multiple benefits for the street lighting application. Lower energy use is the advantage most people think of first, of course. Reduced maintenance costs, due to LEDs' longer life, may run a close second to energy savings or may even lead the list of LED advantages in a particular application. 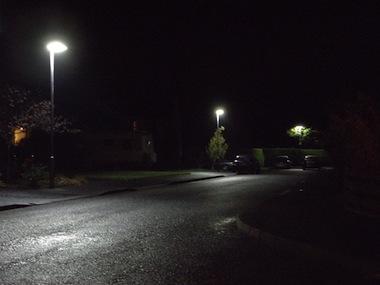 The light from LED luminaires can be directed more precisely to reduce light pollution and random glare and to preserve dark skies. LED lights can be networked and managed with any desired granularity, leading to even greater cost savings. In studies after the cutover to LED street lighting, a large majority of people interviewed are favorable about the brightness and the color rendering of LEDs, compared to whatever they are replacing.

Despite all these well documented advantages, utility companies can often seem to be proceeding overly cautiously, from the point of view of cash-strapped towns and cities that want to begin reaping the cost savings promised by the SSL revolution.

Conflicting incentives
LEDs Magazine ran a long survey in the June issue looking at field evaluations of LED lighting in a range of contexts, including street lighting. The authors, Martha Carney and Howard Wolfman of SSL consulting firm Outsourced Innovation, have this to say about the alignment (or lack thereof) in incentives between cities and their power companies:

Municipal and utility stakeholders have different or competing motivations for SSL [for streetlights]. For example, utility-owned and maintained streetlights typically run during off-peak. This means there is less motivation for LEDs to contribute to [utilities'] efficiency goals compared with other LED applications that can help reduce peak demand... municipalities are driven to SSL by energy and maintenance cost savings, while utilities are far more concerned about validating reliability and other important electrical and power quality characteristics first...

Carney and Wolfman also point out that municipalities' desire to manage street lights in innovative ways, for example, by dimming them or turning them off when not needed, also may not sit well with the inherently conservative utilities. "Utilities perceive dimmed streetlights as a risky proposition," the consultants write. "The majority were not yet prepared to consider adaptive lighting technologies on streets out of concern for liability." (This despite the fact that the effects of street lighting on crime, for example, are difficult to determine.)

Conflict in action
A story in the media this week nicely illustrates the incentive conflicts. The city of St. Petersburg, Fla., wants to change out 30,000 street light bulbs for LEDs in order to save $1.8 million per year in energy costs, according to the Tampa Bay Times. The utility, Duke Energy, is reported not to object to the LEDs in principle -- it just doesn't want to reduce the city's tariff as a result of the lowered energy bill.

If Duke reduced the tariff for St. Petersburg, it might have to do so for every municipality that installed LEDs. "That could have a substantial impact on Duke's bottom line at a time when the utility is grappling with the loss of its Crystal River nuclear plant and billions of dollars in related costs," according to the newspaper.

As federal stimulus money from the American Recovery and Reinvestment Act has dried up, towns and cities have had to shoulder larger capital outlays upfront even as LED bulb prices are falling. The often conflicting incentives that motivate the utilities serving these communities further complicate the upgrade picture.

What experience have you had with LED upgrades to street lighting?