This week: lighting crash tests, Mickey meets Hue, and moving up the LED stack in Taiwan. 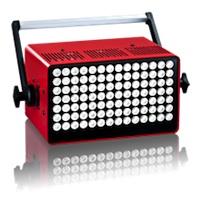 Lighting crash test facilities
Talk about your niche lighting applications. Germany's Messring has long specialized in designing and developing crash-test facilities, and last fall it introduced an LED lighting product for this application (at right). The Bavarian company has now announced a partnership with KHS Technical Lighting, an Atlas MTT GmbH company, whose business is in supplying hydrargyrum medium-arc iodide (HMI) lights for just such applications.

HMI technology was developed (by Osram) in the late 1960s for cinematic lighting; it produces 5500K light with up to five times the efficiency of an incandescent. Directors of photography believe that "the quality of light from HMIs is sweeter and of higher quality than just about any other light source on the market." LEDs will have to prove their mettle to this audience; crash test observers may be less particular.

Mickey, meet Hue
When Hue was introduced last fall, Philips (whose Lumileds division sponsors this site) made it clear that the tunable light technology behind it could find uses in a number of application areas. Philips and Disney have announced the first of these. The two are partnering to deliver table lamps themed on Disney characters that can be used to enhance kids' experience of reading or play, provide a soothing night-time environment, or wake kids gently with gradually brightening light.

Philips Disney lighting products will go on sale in September through both companies' retail channels (Canada and Asia will follow later in the year). The products include lamps in the shapes of Disney characters and LED Candles with a flickering flame. (See the bottom of this article for a list with links.)

At price points suitable for kids' rooms, it seems unlikely that the Philips Disney products will embody the full generality of the Hue lights on sale at the Apple Store -- in particular, no ZigBee WiFi bridge seems to be be in evidence.

LED chipmakers reportedly moving into packaging
DigiTimes is reporting that some LED chip producers in Taiwan are moving upstream and using "next-generation technology to roll out packaged LED chips." The trend may put pressure on packaging houses, which may themselves be forced to move upstream to remain competitive. At all levels of the business, it seems, players want to be more broadly, vertically integrated than they find themselves.

16 million shades of Empire State
In New York this year, the Macy's Fourth of July Fireworks Spectacular's 37th annual running had a little unaccustomed competition. (Besides that from Boston, whose annual celebration with music by the Boston Pops dropped from nationwide distribution this year.)