LiFi in the Real World

Boston startup ByteLight is developing software and protocols to use data transmitted over LED lighting as a way of pinning down a customer's exact location within a store.

A couple of months back we discussed a concept that has been dubbed "LiFi," or data transmitted over visible light. The idea is to modulate the light from an LED at rates above the megahertz range, well beyond what humans can detect. A suitable light detector (which could be a smartphone camera) and software reconstruct the message carried by the modulation. The first widespread public attention to this idea came following a TED talk on the subject by Harald Haas, in August 2011.

We have mostly seen the LiFi idea explored by academic researchers, such as those at the University of Strathclyde in England and Germany's Heinrich Hertz Institute. But it turns out that a Boston-based startup, ByteLight, has been working on commercial applications of LiFi since the spring of 2011.

Out of stealth
ByteLight emerged from its shroud of secrecy last fall, when the company discussed its vision of indoor geolocation with GigaOM. The idea is that each LED light in the ceiling of a retail shop or mall transmits data downward into the area it illuminates. A customer running a ByteLight app on her smartphone can be located within 1 meter based on the particular LED whose signal her app detects. Back-end software in the cloud would be involved to do the heavy lifting. Once the customer is located, the shop can send the app coupons, reviews, a map with "you are here," exact in-store directions to the item of interest, etc.

Each LED lamp or luminaire in the shop would need a chip that implements ByteLight's protocol and orchestrates the modulation of the LED. ByteLight could either manufacture the chips and sell them to luminaire and/or driver makers, or license the chips' design.

The above scenario presents ByteLight with a major chicken-and-egg problem. They not only have to convince retailers to implement their LiFi geolocation system, they (first?) have to convince manufacturers of LED lighting to buy into the whole concept, and supply luminaires with the requisite chip. A retailer might have to retrofit all the lighting in the shop before being able to avail itself of ByteLight's services. 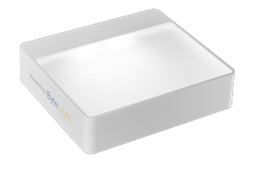 Let's try LFC
Perhaps seeing these obstacles, ByteLight has executed a pivot and introduced a related service it calls "LFC," in analogy with NFC (near-field communications). The latter is a technology for initiating point-of-sale transactions that requires a particular chip in the smartphone. ByteLight's LFC uses an inexpensive device the size of a deck of cards, to be placed near the cash register, that modulates an LED's light for consumption by a smartphone camera. Almost all smartphones have cameras while NFC chips are currently much less common.

The purpose of this exchange of information, carried on modulated light, is to establish the presence of the user's particular smartphone at one particular location. A loyalty app can then credit the purchase, issue a coupon, or take other actions based on the completed sale.

ByteLight's LFC technology is getting rather far afield from LED lighting, but the company wants to ultimately use general lighting as a platform for fine-grained indoor geolocation services.

What do you think of ByteLight's idea? What other uses might there be for streaming data from light fixtures?