Philips has expanded the number of devices that work with its connected lighting system, and its "Friends of hue" program presages more such devices from Philips and others.

We've written about hue several times before; see Related Posts below. (Philips seems to prefer to lowercase hue as a brand name, so I will be following that convention.) 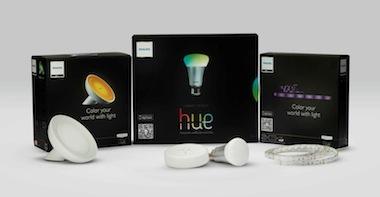 The biggest expansion of the franchise occurred when Philips, whose subsidiary Lumileds sponsors this site, launched version 1.1 of the control app and published an API to allow anyone to write programs controlling hue lights.

The current announcement of "Friends of hue" is more limited in scope, because as far as I can see it doesn't open up development to a wider community. If you have an LED-based project or product that you want to get working within the hue ecosystem, you don't have the information and tools necessary to do that. Presumably you would contact Philips and try to talk your way into the Friends of hue program.

Friends of hue now has a top-level menu item on the Meet hue site, but there's little there besides a two-minute video of hue in operation.

In noting the introduction of Philips Disney lighting products, I wondered whether a full ZigBee controller could fit in the pricing structure of a luminaire for a kid's room. That question has now been answered, as Philips in its press release calls out the Mickey Mouse-shaped light as a full-fledged Friend of hue.

Here are the two new light sources introduced as Friends of hue.

Both new light sources will be available from "Apple flagship stores" in the US on August 8, and two weeks later in Apple stores in Europe. While the original hue starter kit with three light bulbs and ZigBee bridge is also for sale on Amazon, it seems that Apple stores will have exclusive access to the new devices for a while.

These new devices won't set any records for luminous efficacy; in fact their ratings are in the ballpark of an incandescent lamp manufactured decades ago. The Bloom generates 120 lumens using 8 Watts (15 lm/W); the LightStrip produces the same level of light using 10 W (12 lm/W).

Which brings up the question: How do you even determine the lumen output of an LED whose color can be tuned across the visible spectrum? Sample at different colors and average?