This two-year-old comparison of nine LEDs to HPS lighting may be technologically dated, but it turned up plenty of real-world issues of application and measurement.

The Department of Energy, in cooperation with the Municipal Solid-State Street Lighting Consortium, has released the results of a comparison of nine LED street lights and the high-pressure sodium lights they replaced. The study took place in Kansas City, Mo., over the course of 2011 and 2012. The legacy HPS fixtures consumed 100, 150, 250, and 400 Watts. 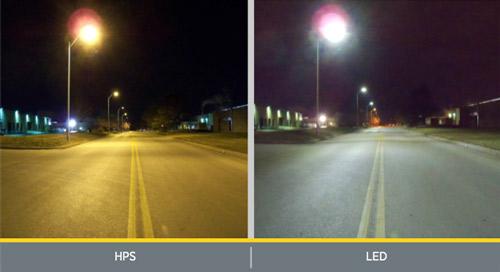 The results overall: The LEDs collectively demonstrated only slightly higher efficacy than the sodium lights, 15 percent averaged over all nine LED products. Much of the energy saving came from the LEDs' reduced light spillage and overall lower light levels. Some of the LED products met the desired light levels, though some did not.

The nine products chosen for the study were selected by Kansas City as the best at meeting its criteria among a larger number of submissions -- although eight out of the nine did not strictly meet all of them. Generally speaking, the LEDs replacing lower-wattage HSP lights met more of the criteria. Note that these products were designed and put on the market three to four years ago, so it is safe to assume that LED efficacy levels would be higher if such a test were to be initiated today.

Here are a few of the results turned up by the study, discussed in detail in the full report. (Here is a two-page summary.)

The study contains a great deal of detail about field measurements: How they were conducted, expected and unexpected sources of variation in readings, the measurement of luminance vs. illuminance, comparisons between measured and calculated illuminance, etc. The recommendation is that field measurements not be the backbone of assessment, but be used as one part of a comprehensive performance assessment program.

Here's a hypothetical: Assume a new study took its first field measurements in February 2014, three years after the DoE's Kansas City effort. How do you think the results would differ given the advances in LED technology?