Another Route to SSL: Laser Diodes

A research group has demonstrated that white light can be produced at reasonable efficacy and with good CRI from remote phosphors illuminated with a laser diode, instead of an LED. 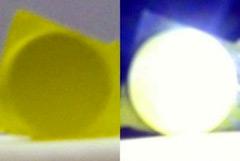 The researchers, from UC Santa Barbara, were led by Kristin Denault and Michael Cantore and included Shuji Nakamura, inventor of the white LED. The research was published in the journal AIP Advances.

The group did not make a phosphor-converted laser diode (PCLD) device; rather, the experiments were carried out inside an integrating sphere with a mounted phosphor in the center illuminated by a laser light shining through a side port.

One of the principal reasons for considering laser diodes as illumination sources for white lighting is that they do not suffer "droop" -- reduced efficiency and more heat -- at higher currents in the way LEDs do.

Theoretical efficacy
The researchers noted that luminous efficacies will go up in time proportionately to increases in the wall-plug efficiencies of the driving laser diodes. They calculated the maximum possible efficacy for one of the configurations, that of the blue laser and YAG:Ce, as 78 lm/W for 4555K light with a CRI of 58. They extrapolated that if the wall-plug efficiency of the laser reaches 75 percent, then the luminous efficacy of such a device could reach 200 lm/W.

Laser Focus World's coverage of the research achievement includes links to other research and commercial investigations into producing white light via laser diodes and other non-LED means. In particular they note that BMW has been working on a laser-powered automotive headlight since at least 2011 (such lights are not available on any production cars at this point).

What do you think, could laser diode-driven SSL be competitive in time with devices based on LEDs?