The Illuminating Engineering Society has not yet published the full list of "significant advancements in lighting art and science," but some brands are spotlighting their inclusion in the annual report. 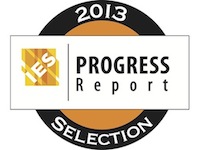 Each year at its Annual Conference in the fall, the IES reveals the products chosen by its committee to represent milestones in the development of lighting in the year preceding. The monthly magazine of the Society, LD+A (Lighting Design & Application), highlights trends from the Progress Report in November and December, and then in January of the following calendar year LD+A publishes the full list.

Last year the Progress Report called out 130 products and services -- see the list beginning on page 47 of the January 2013 edition of LD+A.

The 2013 Annual Conference will be held on October 26 to 29 in Huntington Beach, Calif., and the presentation of the goods and services accepted for the 2013 IES Progress Report will occur at 5:00 p.m. on Monday, October 28.

Bragging rights
Early this week we began seeing press releases from companies whose products were chosen by the IES Committee; presumably the winners had been notified last week. We outline three of those announcements below.

Philips Lighting Solutions boasted the inclusion of 14 products and technologies in the Progress Report; the company listed 12 of them in its press release. (The Lumileds subsidiary of Philips sponsors this site.)

Acuity Brands listed 14 products from their various subsidiaries that made the list, including two OLED luminaires and two software packages for planning and simulation.

Lighting Science announced that one of their products was listed, the Advantage BR20 LED lamp.

At this rate we may hear from all the winners before the IES conference gets under way. I'll collect any more I see for next Monday's Roundup.