Controls for LED lighting are one obvious way to reap value downstream in the ecosystem.

We heard this message, with different emphases, from speaker after speaker at the

SSL lighting with ubiquitous controls may be analogous to the services era. And once we start deploying sensors widely on LED lights, the era of data will be upon us. 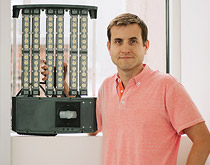 Boston-based Digital Lumens showed up a few times at the conference. Their tagline is "making every light intelligent." The company's wirelessly controlled lights were used in a 2012 retrofit project for the Associated Grocers of New England, for their warehouse in New Hampshire. The project achieved around 90 percent savings over the previous fluorescent regime -- 50 percent from energy savings and another 40 percent from occupancy sensing and just-in-time lighting.

On the panel with Digital Lumens, the design house, and two folks from AGNE was a representative of Public Service Company of New Hampshire. PSNH orchestrated a utility rebate for the project. What I found interesting is that the PSNH rep said that the project was the first they had seen utilizing lighting controls. So we're just a bit over a year into this next phase of SSL's evolution.

The view from money
A panel of three investment bankers and venture capitalists added more emphasis to the "go downstream" message. The three money men represented a total of $3.1 billion invested in clean technology, much of it in lighting. Neil Cameron of Emerald Technology Ventures said he couldn't see how an upstream infrastructure play like a new attack on GaN-on-Si could possibly work now. Dennis Costello of Braemar Energy Ventures identified the trend that VC money is seeking less capital-intensive investments of late: downstream. Rob Day of Black Coral Capital, an investor in Digital Lumens, predicted the day when "everything in the building will be networked," and some current devices will start to look redundant -- thermostats, for example, because a temperature sensor can be anywhere. Lighting will become more central, according to Day, because it's the one thing that can't be replaced functionally.

As the VCs discussed controls from the stage, Costello said "I don't know how controls are going to infiltrate the ecosystem." Day replied that it will happen because controls will simply be built into every lamp and luminaire and piece of the architecture that lights up. It will be expected, and customers aren't going to want to pay extra for controls.

It is ubiquitous controls and sensors that are going to usher in the era of big data from our lighting fixtures, and from our built environment generally.