Industry and government have been trumpeting the savings in energy, greenhouse gases, and money that the switch to LED lighting will bring. What if we just use more light instead?

We have asked that question from time to time in the discussions in this community. Two items in the news recently suggest that now is a good time to bring it up and address it more directly.

Holiday lighting gone mad
Apparently the Guinness Book of World Records has a category for the largest number of lights on a residential property. An Australian lawyer named David Richard has reclaimed the title this year by mounting 502,165 LED lights on 31 miles of wiring. (Richard had set the record in 2011 with 331,038 lights, but lost it in 2012 to a man in New York.) 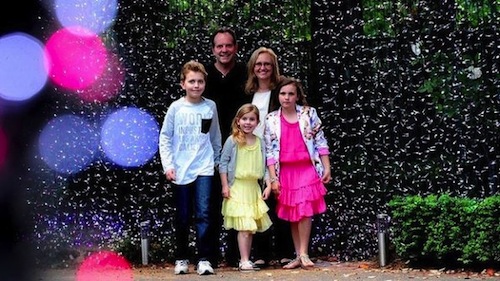 David Richard with his family and a small fraction of his half million LED Christmas lights.

Richard and his wife lost a child to Sudden Infant Death Syndrome years ago, and the purpose of the record-setting display is to raise money for the charitable organization that helped them at that time. Last year (when the record went elsewhere) they raised $78,000, and hope this year to hit $100,000 for the charity.

The cause is noble and good but the display is, let's face it, beyond excessive. Can you imagine anyone stringing half a million incandescent lights? It's almost unthinkable on the basis of power alone. The economy of the LED holiday lights makes this enormous excess of light not only thinkable, but feasible.

One way to light a city
The city of Moscow would go on most anybody's list of places they would least like to spend the winter. Not only is it cold, it's dark: The city is 11 degrees below the arctic circle, where the sun does not set on the summer solstice and does not rise on the winter solstice. Muscovites spend up to 18 hours in the dark during the winter.

City authorities are making a show of responding to complaints that the winter days are too long and too dark (it doesn't help that the Kremlin abolished daylight savings time two years ago). How are they doing this? By covering the city's surface in LED lights, or so it seems. (The lights are being underwritten by sponsors and investors, and public money is not being used, according to The Moscow Times.) 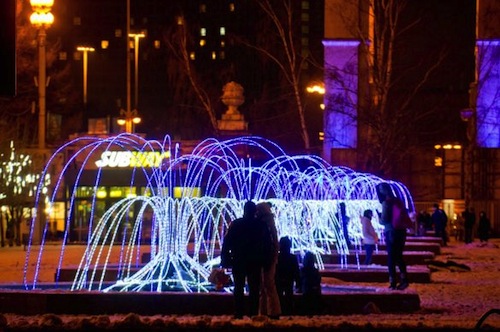 City Hall has been wrapped in light. Decorative lights and banners stretch above dozens of major streets, highways, and pathways. More than 7,000 trees have been wrapped. "Overall, more than 12,000 new lighting elements and constructions will emerge across the city after the second and final phase is finished on Dec. 15," The Moscow Times reported.

New Years decorations will be added to the mix: snowmen, reindeer, and fir trees rendered in LEDs. Seventy-three lighted Christmas trees will be raised.

Finally, 38 bridges over the Moscow River will be lit with LEDs. The lighting design has been completed for more than half of them and the rest are in the pipeline.

A government spokesman claimed that all of this lighting (well, minus the bridges) would use about the amount of electricity it takes to light an apartment block. Somehow I'm suspicious of that calculation.

Nothing exceeds like excess
Would Moscow have gone this route before LEDs? It's hard to imagine. The energy-saving lighting encourages Muscovites to do what they have no doubt desired to do since the city was first raised: banish the night.

In how many cities, towns, and country roads worldwide will people give in to the ancient desire to eliminate darkness once and for all? Yet we do so at our peril. We all evolved under cycles of light and darkness We're just beginning to get glimpses of what messing with those cycles can do to human health and to ecosystems. We'll probably learn a lot more about that before we're through.