Until yesterday, the WeMo system consisted of wall switches and motion controllers automatable via Android or iOS apps, and integrated with ifttt.com (If This Then That) for coordination with other events via the Internet. As far as I can tell, the system communicates entirely via WiFi -- no ZigBee or Bluetooth. 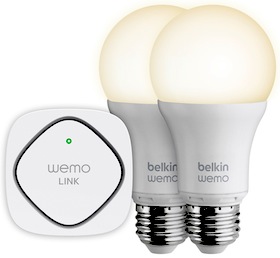 The additions that Belkin announced on Monday include the WeMo LED Lighting Starter Set ($130), the WeMo Smart LED Bulb ($40), and the WeMo Maker Kit, whose price was not announced. (There is also an automatable Crock-Pot SmartSlow Cooker that will not concern us here.) These will all be available in the spring, with upgraded Android and iOS apps coming in February.

So for $20 more than the Connected by TCP starter set, you get two light bulbs instead of three, along with a WiFi bridge. For $70 less than the Philips Hue, you get fully controllable lighting minus changing color. But for those who have already bought into WeMo automation, the addition of an LED lighting component will be very welcome.

Specs
The bulbs put out 800 lumens at 3,000K CCT; I could not find word on the color rendering index. The company says they are "fully dimmable," but no numbers are given. The stated lifetime is 25,000 hours -- "up to 23 years." There's no word on a warranty. The bulb looks superficially like a Switch Lighting Infinia with a little more curve to the heatsink. It may be a while before we see a teardown of Belkin's bulb. As far as I can tell, it is not available yet even to early influencers -- probably in a couple of months.

Belkin is touting control features such as the ability to turn lights on or off or schedule them from anywhere, a "vacation mode" that uses lights to make a home look occupied, and the ability to dim lights gradually to sleep or brighten to wake. CNET's review mentions using ifttt.com with an iOS Location trigger to achieve a crude sort of geofencing. You can turn the lights on when you approach the house and extinguish them when you leave the area.

The downside of the WeMo system is that it represents yet one more proprietary silo in the space of home automation. There are efforts to get the various things (Belkin/TCP/Hue lights, Nest thermostats, Locktron smart locks, etc.) speaking a common language. One of the more promising efforts is Marshall Rose's Thing System. (A list of compatible devices is available here.) It provides a lingua franca to allow all of the supported things to work together. This kind of protocol translator will be necessary until one or a few home automation standards become dominant -- in other words, for a long time to come.