A Taiwanese company, Edison Opto, is offering customers what looks like a smarter way to characterize their LEDs so that luminaire designers have better data to work with.

First, let's look at the way many LED manufacturers do binning. Digi-Key Corp. has posted a lucid introduction to binning based on seven-step chromaticity quadrangles, following one of the ANSI_NEMA_ANSLG C78.377 standards (Digi-Key's explainer uses the 2008 version).

Below is a summary of Edison Opto's idea in a single diagram. Click the link in the caption to bring up a larger version in a new window. I have taken the liberty of expanding part of the ANSI C78.377 diagram below to make it clearer what's going on. 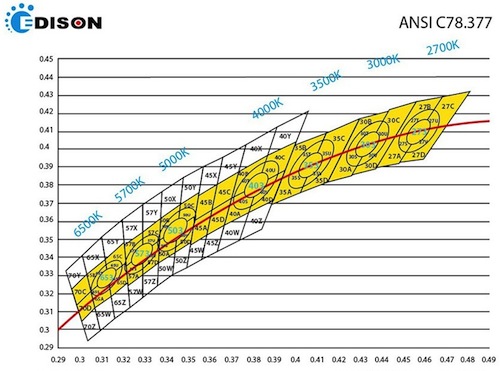 Click here to view a larger version of this diagram in a new window.
(Source: Edison Opto Corp.)

The idea is to combine the ANSI bin group with tighter MacAdam ellipses to provide and communicate closer tolerances for the color of a particular LED, and to allow mixing of LEDs in a more fine-grained and predictable way.

Within the seven-step chromaticity qudrangle, Edison Opto draws five-step and three-step ellipses; they then use unique SKUs to specify into which of nine regions thus defined an LED's chromaticity falls.

To extend the model, substitute the first two digits of the CCT value in Kelvins for the "27" in this example.

You can see how mixing an equal number of 27T and 27V LEDs would result in color averaging out on the blackbody line. Doing so would presumably be far cheaper than sourcing an equal number of three-step, 273 LEDs. And for applications less demanding of color precision, 27A-27B-27C-27D LEDs could be mixed to similar if less exacting effect, again at a significant savings.

Now, I have never put together a luminaire from piece parts. This binning scheme seems to me to be an improvement over the status quo ante, and something that other LED makers might want to emulate. Our own Sunrise Strip author, Bill Reisenauer, informs me that LED shops experimented with similar extended binning as much as 10 years ago. But Edison Opto seems to have come up with something useful and workable, if not exactly brand-new.