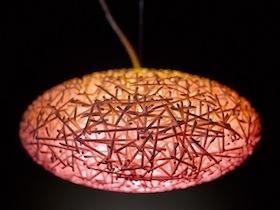 Hue Luminaires
The eye-grabbing headliner is the line of four Hue Luminaires, each designed by one of two internationally known design teams (WertelOberfell and Strand+Hvass), and each produced on a 3D printer. The one pictured here is one of the pendants. There are also two table lamps. TechCrunch.com has a rotating display of all four (at the bottom of that post).

The luminaires, and presumably the other announced Hue additions described below, will be on view at the Light+Building show in Frankfurt, starting Sunday March 30. They are quite pricey: €2,499 ($3,435) for the pendants and €2,999 ($4,122) for the table lamps. One blogger somewhat cynically opined that the whole purpose of the Hue Luminaires is to make the rest of the Hue line seem affordable. I'm not quite that cynical. I think Philips is trying to establish some high-level, trickle-down glamour for the whole Hue phenomenon, far beyond the ranks of tech early adopters. I would not be surprised to see the luminaires showing up in house spreads in Architectural Digest or Town & Country before the year is out. 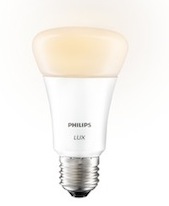 Hue Lux
This is the down-market Hue. No color, white only, it dims and that's about it. Except that you can program it using iFTTT, as you can everything else in the Hue universe. Philips's example is to make it blink when your team scores. Pardon me, but is that worth $40 per bulb?

I think the real point of Lux is to give people an easier -- read "cheaper" -- entry point into the world of Hue. For $100 you get two Hue Lux bulbs and the gateway (don't anybody say "gateway drug," now). The $100 figure may not quite be at the level of an impulse buy for most people, but it's a significantly lower barrier than $200 for the original Hue starter kit. Remember also that $40 per bulb is in the ballpark of the emerging white-only competitors, such as Connected by TCP ($28) and the Belkin WeMo ($40).

Hue Tap
The final new announcement is a standalone switch for Hue. It is unpowered. Tapping the button provides enough energy, converted into electrical form, to send a quick blast out on ZigBee frequencies. The technology behind the Tap is, I presume, sourced from EnOcean. The company is the reigning king of energy harvesting in the smart-home arena. We met EnOcean in January in connection with NXP's use of its technology, along with near-field communications, to simplify setup of a home network.

The Hue Tap has four buttons that can be associated with any desired four settings for one or (I assume) a group of Hue lights. The settings can be dimming levels or, in the case of color Hue products, specific colors. The exact functionality won't be known until Philips comes out with the next version of the iOS and Android app.

Timing
The Hue Luminaires can be pre-ordered starting Monday March 31. Hue Lux is promised for the summer timeframe and Hue Tap for "after the summer." The later two products will probably be available in the usual channels, e.g. the Apple Store and Amazon. I rather expect that the Hue Luminaires will always be a custom order.