This week: A smart lighting seminar, vertical farming and LEDs, and 3D-printed lenses.

Luxexcel's 3D printed lenses
We have seen 3D printing inching into the world of SSL in Philips's designer luminaires in the Hue universe. Now here's a use of that up-and-coming technology that is a little closer to the center of the action. 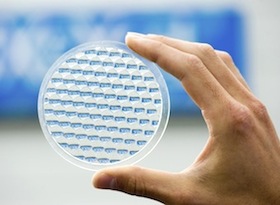 Luxexcel has commissioned a new production site in the Netherlands for its patented Printoptical process. This takes an optical element from a CAD drawing to physical realization in one step; no post-processing is needed. The 1,000-square-meter (10,800-square-foot) facility will be able to fill orders of "several 10K pieces" in the first months of operation. The facility is dedicated to lighting for now, but Luxexcel has fielded questions from the automotive and opthalmic industries.

Energy Star Partners of the Year emerging
On April 16, the US Environmental Protection Agency will announce the winners of its 2014 Energy Star Partners program: those companies among the 16,000 in the program that were judged to have done the most for the cause of energy conservation over the previous year. There will be an awards ceremony at the end of this month. However, the dozen winners were all notified in February, perhaps to enable them to get their PR machinery cranked up.

We are beginning to hear from the winners. They include General Motors, Pella, Sears, and everyone's favorite producer of LED lamps, TCP. The press releases are all exactly as self-congratulatory as you would expect.

Smart lighting seminar
Here's a half-day event that might be of interest if you are anywhere near Silicon Valley. MCA and Semico Research are getting together to produce IMPACT Smart Lighting 2014: Brilliant Opportunities for Building Automation, to be held in Santa Clara on Wednesday, April 23. The focus will be on smart lighting technology -- integrating sensors, controls, connectivity, and communications into luminaires -- and the market opportunities it will enable in commercial building applications. The panel that closes the event will feature speakers from PNNL, Lighrera, Intematix, Daintree, Light Think Studios, and UC Davis.

LEDs and vertical farms
We know that solid-state lighting is proving valuable in horticulture for its energy savings and its ability to provide a carefully tuned spectrum of light. Now LED-based lighting is finding use in a particularly green niche in that field: vertical farming. This technique is of interest because it allows a greater density of crops to be grown per unit of land area. The startup Nuvege says it can grow more than six acres' worth of crops in a building covering less than 0.7 acres.

This leverage will be important for feeding the world in the future, Forbes reports; the World Resources Institute estimates the world population's requirements for caloric intake will have grown 69% by 2050. In addition, vertical farming can be done in cities, which promises to reduce the need to ship food over long distances and to increase the food security of nations that currently must import large quantities of food.