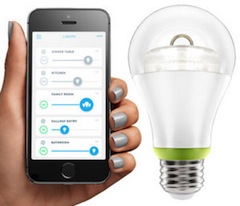 GE's cheap connected bulb
That sound you hear is price barriers falling. GE has introduced a family of connected bulbs, which communicate by ZigBee and are controlled by a Wink hub and mobile app. Haven't heard of Wink? It's a contender in the home automation free-for-all, sold by GE subsidiary Quirky.

GE will be offering the Link, an A19, 60W-equivalent ZigBee bulb, for $15. The BR30 form factor goes for $20 and the BR38 for $25. A starter kit with Wink hub and two A19s will cost less than $50 at Home Depot some time this fall. You will be able to pre-order at the Home Depot site starting today.

LEDs that imitate filaments
Not content to emulate the size and shape of traditional incandescent bulbs, some LED makers offer a product that goes further: imitating the look of incandescents' filaments. Margery Conner has a roundup of some of these products on her Designing With LEDs blog. Most are by makers with no name recognition in this country, but Philips also has an entry in this space (shown at left) that retails for about $12.

Conner is more concerned with the packaging innovation that resulted in a white-light, 2mm x 29mm device. Using several such components in a bulb offers a number of advantages: getting omnidirectional light is easier, and heat management is simplified. As far as I can see, most such bulbs don't have a heat sink; the elongated LED elements radiate heat along with their light into the (probably gas-filled) bulb envelope.

LEDs outperform HPS in horticulture
This study puts some rigor behind the now-common observation that horticultural lighting based on LEDs has some advantages over traditional forms, in terms of encouraging plant growth.

Canadian researchers illuminated hydroponically grown tomato plants with three LED light intensities at three ratios of red to blue light: 5:1, 10:1, and 19:1. For comparison, tomatoes were grown under high-pressure sodium (HPS) lighting alone, HPS supplemented 50-50 with LEDs, and red-only LEDs above and below the leaf canopy. Two experimental runs lasted for 120 days each in the summer-fall growing season of 2011 and the winer-spring season of 2012.

The results were that the 19:1 ratio resulted in the highest biomass (excluding fruit), with more growth tracking higher light intensities. The 5:1 ratio, high-intensity light produced the most fruit. In summary, the researchers write, "LEDs have been shown to be superior in fruit production over HPS alone, and LEDs can improve tomato fruit production when mixed with HPS."

The study, "Supplemental Lighting Orientation and Red-to-blue Ratio of Light-emitting Diodes for Greenhouse Tomato Production," was published in the American Society for Horticultural Science's journal HortScience. Its abstract is available here.

Weed's chronic energy use
Growing marijuana indoors requires a lot of energy: not only for lighting, but also for dehumidi­fication, ventilation, heating, and air conditioning. This report in Technology Review claims that pot grow houses claim about as much energy per square meter as high-end datacenters. While datacenters have been competing furiously for years to increase energy efficiency, that process has barely begun for pot cultivation, as the practice begins to emerge from the wrong side of the law across the US.

Marijuana farming accounts for $6 billion of electricity usage in the United States, TR reports; much of that energy currently is stolen from power companies for illegal cultivation operations.

LED lighting may improve yields for this crop, as it has been shown to do for others, but it is unlikely to save a lot of energy. Lighting accounts for about one-third of cultivation energy usage, and LEDs are currently on about the same order of efficiency as HPS and induction; and they cost more.